What You Get in Your Visual Studio Subscription

With an MSDN subscription, you get all the software and benefits you need to stay up on all things code, including monthly cloud credits, collaboration tools, training perks, support, and more—all the latest and greatest from Microsoft.

This also provides IT departments with a cost-effective way to license Microsoft software for individuals involved in the development and test process, but who do not require the full suite of Visual Studio development tools.

Beyond giving a single developer user cool software… providing a Visual Studio Subscription for all of the Developer and QA team provides an efficient, per-user, license model for your entire Dev & Test environments. Adopting this model means you do not have to purchase any stand-alone Microsoft products for pre-production.

The Visual Studio Subscription licenses each user for unlimited installs and instances of the products on their local, shared and virtualized
environments. 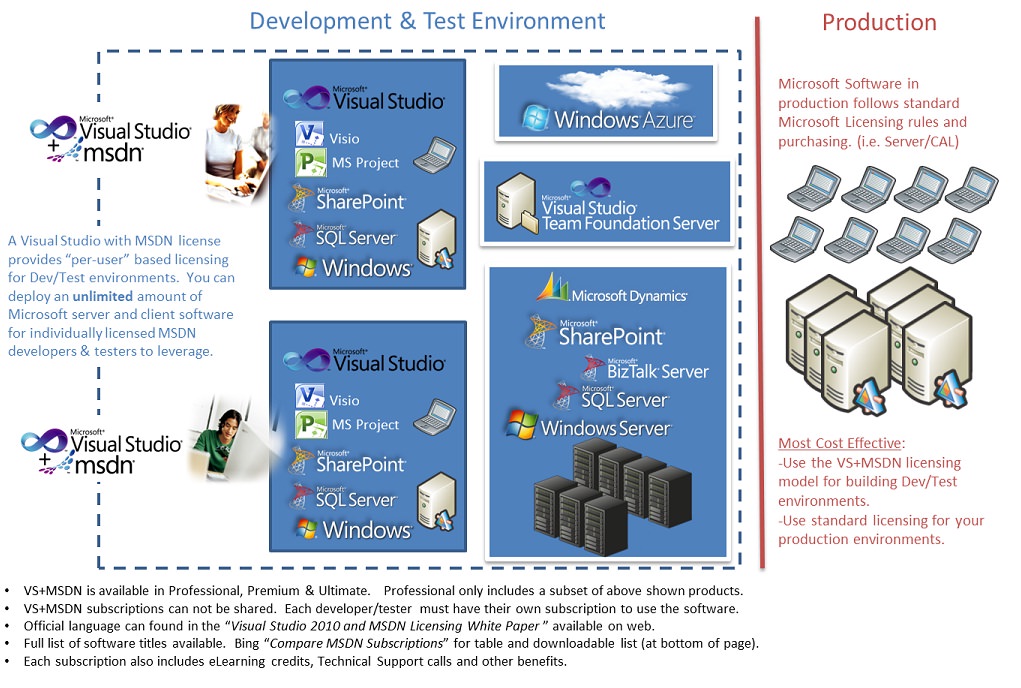 How much is a Visual Studio Subscription

A standard Visual Studio Enterprise subscription with MSDN costs $5,999 for the first year and $2,569 annually for renewals. VL customers get a discount, of course. An annual cloud subscription (with non-perpetual license) is a flat $2,999 per year. This is as of 2016 and subject to change.

Who can use the Software

Any individual developer can use Visual Studio Community to create their own free or paid apps. In addition, any number of users may use the software to develop and test device drivers for the Windows operating system.

Licensed are for Design, Development, Testing, and Demonstrating Your Programs

Where the Software can be Installed and Run

The licensed user can install and use the software on any number of devices. The software can be installed and used on your devices at work, at home, at school, and even on devices at a customer’s office or on dedicated hardware hosted by a third party. Most subscriber software can also be run in Microsoft Azure VMs. However, the software is otherwise not licensed for use in production environments.

We need to train on C#, basic to advanced. Does the MSDN have this type of online learning for use by various levels of programming capabolity, 4 persons…. mamybe more.